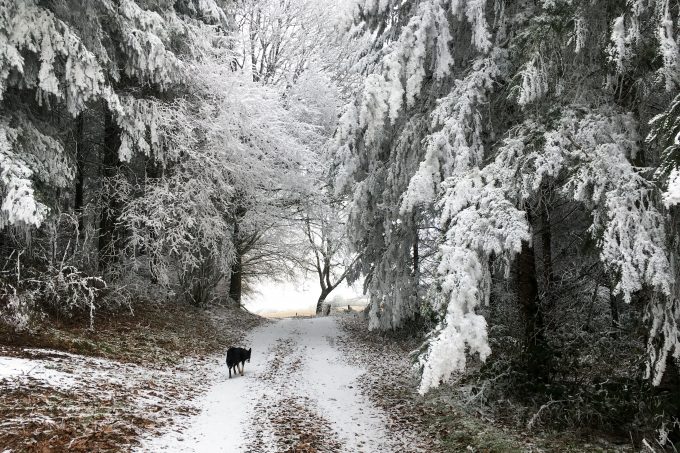 Our third winter has again been quite different from the past two. I wasn’t looking forward to it because last winter seemed to be hard and lasted forever. But due to our multiple moves it seemed like spring came around much faster. This winter’s theme has been ‘doing nothing’. Ofcourse we haven’t really been doing nothing, but we just wanted to get some rest, and not make any immediate plans. After our second move to our current house, I was completely drained. I was still feeling the after effects of having a baby, the brain fog was only just starting to lift. We desperately needed to get some rest. And winter is perfect for that: there is not much to do in the garden, the weather isn’t very inviting most of the time, and our new (to us) couch has a high snuggle-up factor.

Over the past few months we’ve settled in nicely. We made it our goal to connect with the neighbours and the village down the road right away. We went to the new years ‘voeux’, which is a community event where new inhabitants are welcomed and you eat a kind of pie and drink champagne. Ofcourse we as Dutch people among the French stand out a bit, and Frida always draws attention. The French do seem to love babies! Even the men go all coo-coo over her, which is very normal apparently. The Dutch men seem to think themselves too cool for that. We have also met our potential first French friends, people our own age. And we’ve had a big lunch over at the neighbours, so we’re doing our best to have more of a social life outside the house.

Frida turned 6 months in February, and she had her first day at ‘la crèche’ right away. She’s still going only a few mornings a week, but it’s as much for her as it is for us. Having her go to the crèche makes us feel more part of the French lifestyle. We get to experience how they raise and feed their children, and we can adapt our rhythms to that as well. I’ve learned a bunch of new words too (basically all the ways you can speak about ‘sleeping’, or rather ‘not sleeping’) and am slowly improving again. This step towards independence and integration was the right thing to do, and we are still feeling confident about our move to France. It’s funny, some people are still like ‘oh so you’re really staying!’. It has always been our intention, but I guess we change plans so often people don’t know what to expect anymore.

We’re still working out what our next step will be. Figuring out what we want is an ongoing process. We say we want to build our own house, but at the same time we’re not sure we want a project that lasts one to two years. We say we need more space in case we have another kid, but we keep looking at small houses and even tiny houses. We say we want to maybe buy a house but nothing we see gets us really excited. Lately we’ve been talking about completely stripping our van and rebuilding it. There’s just so many options, how do you figure out what you really want? I read this interesting article that said you should choose your struggles, not your goals. So say you want to get fitter, are you willing to exercise daily? If not, then you don’t really want that and you can let it go. So I’m trying to look more at the ‘struggles’ that we’d need to go through to get to our goals, and see if we can choose the right direction that way.

Until then, we have a great little house to live in. It’s tiny, again, but for us still the biggest house we’ve lived in so far. And it’s only 50m2 (540 square feet), haha. The view is amazing and we’re enjoying it every day. I’m looking forward to spending our summer here, getting garden going again. We’re finally getting some chickens, and we also have permission to put up the yurt again! This time it will just be for visitors, but maybe we’ll spend a few nights there ourselves, too. I have a feeling our third year in France will be a good one!

3 Replies to “Daily Life in the Morvan – Third Winter”

Powered by The Retailer.

What are you looking for?